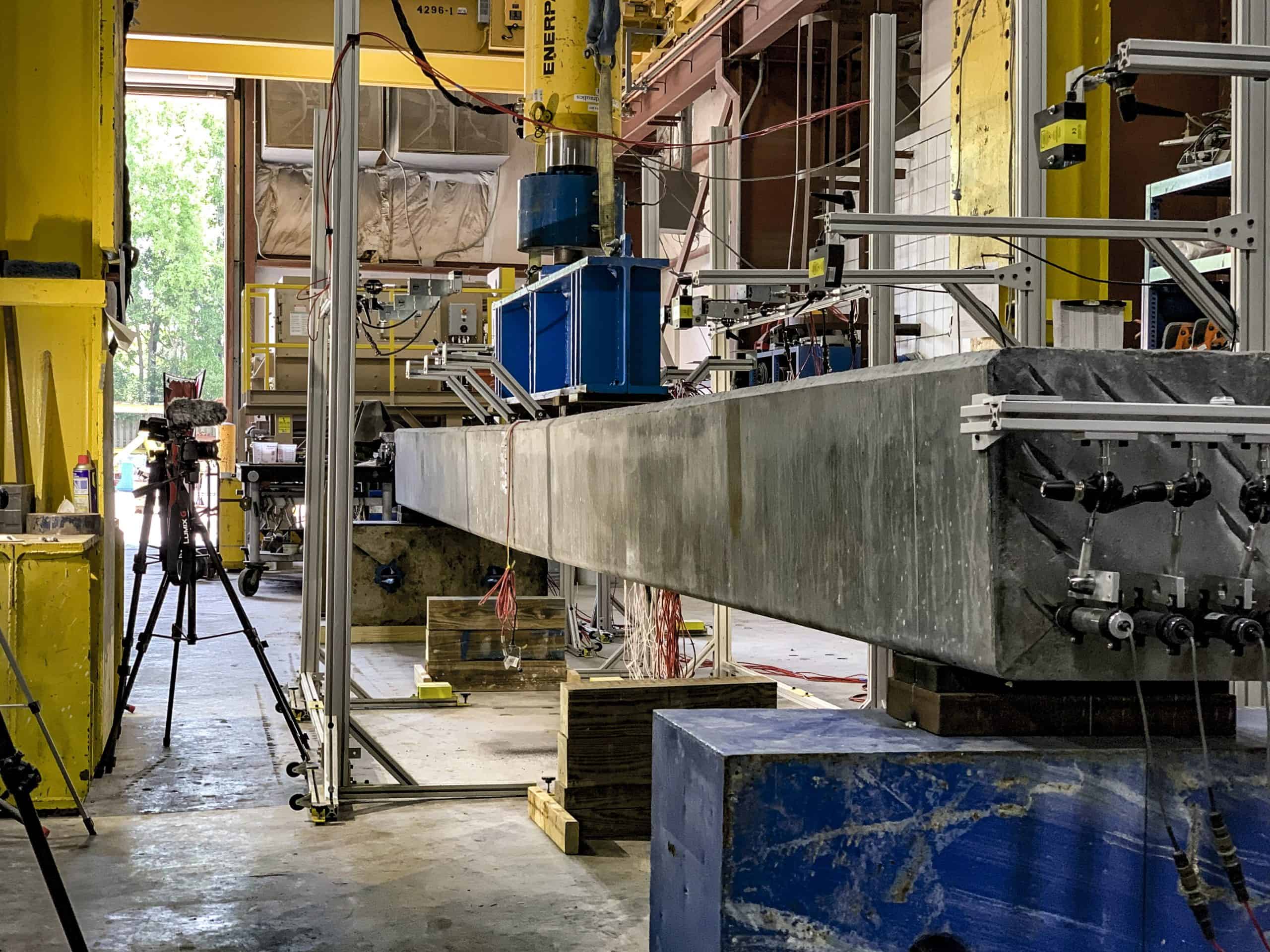 Concrete is the foundation of modern construction. Its strength and durability enables it to support heavy structures over long periods of time.  Compressive strength is the prominent concrete specification, but tensile, flexural, and other properties can play a significant role in modern designs. How is concrete strength really measured?

In this article we will take a look at the different types of concrete strength, how they’re tested, why they matter, and how they impact the quality, longevity, and cost of concrete projects. We also demonstrate the differences in strength between traditional concrete and the newer, innovative concrete technology: Ultra-High Performance Concrete (UHPC).

Terminology: Concrete Strength Properties and Why They are Important

Force is imposed on the concrete matrix from opposite sides, squeezing until it fractures, establishing the limits of a given cured concrete mix. Aggregate materials within the concrete distribute and counterbalance the applied load.

A higher psi indicates higher compressive strength and, typically, a higher cost. But a stronger concrete mix often correlates to more durability, longevity, and, sometimes, a more efficient volume of material than a lower-strength mix.

The ideal concrete psi for a given project depends on various factors. Different types of concrete structures have normally acceptable psi ranges that are governed by design codes and industry standards. The American Concrete Institute (ACI), American Society of Civil Engineers (ASCE), and regulatory groups such as the American Association of State Highway and Transportation Officials (AASHTO) are often cited for concrete guidelines or minimum requirements.

The bare minimum is usually between 2,000 and 3,000 psi for fill and simple surfaces (e.g., patios or sidewalks). ACI sets 2,500 psi as the structural concrete minimum. Pavement, slabs, and footings can be up to 4,000 psi. Suspended slabs, beams, and girders (typically found in bridges) might be 5,000 psi. High-rise columns and other high-load-bearing members may require compressive strength from 7,500 to 10,000 psi, or even more than 15,000 psi, depending on structure height and load.

Higher psi values result in other benefits, such as better long-term environmental performance. Freeze-thaw cycles in colder climates can compromise weak mixes, and may require increased strength to maintain its intended use over years of cold weather. A higher compressive strength usually provides more resistance to this type of degradation over time.

Compressive strength is normally tested at seven days and then again at 28 days. The seven-day test determines early strength gains and verifies that the mix is on track to set properly. The final cured design strength (and the basis for minimum design values) is the 28-day test as noted in the ACI standards.

Tensile strength defines concrete’s ability to resist breaking or cracking under tension. It affects crack formation and the ability of certain members, such as horizontal beams, to withstand transverse loading and the resultant “pulling” forces that effectively act to pry open the concrete transition zones (comprising the cement/binder that holds aggregates in the matrix). Cracks occur when tensile forces exceed the tensile strength, which is measured in psi.

The tensile strength of traditional concrete is significantly lower than its compressive strength. Therefore, concrete members undergoing tensile stress must be reinforced with materials with high tensile strength, such as steel. This reinforcement introduces other costs, installation requirements, and long-term maintenance considerations.

Flexural strength is normally about 10 to 15 percent of the compressive strength, depending on the specific concrete mixture.

There are two standard tests from ASTM that are used to determine concrete’s flexural strength —C78 and C293. Results are expressed in psi, as a Modulus of Rupture (MR).

Flexural tests are very sensitive to concrete preparation, handling, and curing. The test should occur when the specimen is wet.

Compressive strength tests are regularly used when describing concrete’s strength because they are considered more reliable. However, tensile and flexural strength are valuable properties to understand when designing complex members or specifying reinforcement.

Other factors contributing to the strength of concrete include:

This refers to the ratio of water to cement in the concrete mixture. A lower water-to-cement ratio makes stronger concrete, but it also makes working with the concrete more difficult.

A proper balance achieves the desired strength while maintaining workability.

Traditional concrete is made of water, cement, air, and an aggregate mixture of sand, gravel, and stone. Proportioning these ingredients correctly produces a stronger concrete. A concrete mixture with too much cement paste may be easy to pour, but it will crack easily and not withstand the test of time. Conversely, too little cement paste will produce a concrete that is rough and porous.

Designs may also incorporate different admixtures that contribute additional properties to the concrete. These tend to be specialized to the concrete producer and added for specific use cases (such as extreme climates). The proportion of admixtures must also be specified to avoid over or under-adjusting the mix to achieve the desired performance.

Optimal mixing time is important for strength. Strength tends to increase, with mixing time, up to a point. However, over-mixing causes excess water evaporation and the formation of fine particles within the mix. This weakens the concrete and makes it harder to work with.

There is no golden rule for optimal mix time. It is impacted by many factors, such as the type of mixer being used, the speed of the mixer rotation, and the specific components and materials within a given batch of concrete.

Generally, the longer the concrete stays moist, the stronger it will become. To protect the concrete, precautions are taken when curing concrete in extremely cold or hot temperatures. Heat curing is sometimes used to speed up the process, but manipulating concrete with heat may produce other unwanted side effects, depending on the mix.

New concrete technology is available that has greater strength than traditional concrete, in all aspects. This innovative material is called Ultra-High Performance Concrete (UHPC), and it is now being implemented throughout the construction industry, including many state and federal infrastructure projects, because of its exceptional strength and durability.

UHPC’s composition is similar to traditional concrete (roughly 75 to 80 percent of the ingredients are the same). However, that extra 20 percent makes a big difference. Integrated fibers make UHPC unique, along with slight but significant alterations to water content, admixtures, and the mixing process applied to optimize the fiber reinforcement.

Fibers can include polyester, fiberglass bars, basalt, steel, and/or stainless steel. Each of these materials create a progressively stronger end product, with steel and stainless steel delivering the greatest strength gains. Modifications to the overall mix composition will be dependent on the fiber size and material.

Here is a closer look at how UHPC compares to traditional concrete:

Other benefits of UHPC include:

It is no surprise that UHPC is gaining traction in American infrastructure and being used to repair the country’s aging bridges and roads. This material increases the lives of bridges, decreasing their overall lifecycle cost. UHPC requires less maintenance because of its increased strength and weather-resistance. This makes it more cost efficient to use.

Ideal uses for UHPC include:

When assessing a given concrete mixture for a project, it is important to know its strength properties. The right concrete mix will achieve the right strength, in the right categories, in the most material-efficient manner for the project.

Concrete innovations such as UHPC outperform traditional concrete in strength and longevity. This makes it a smart choice for designers and planners working on new concrete construction and repairing legacy projects. Reduced maintenance with better performance means that UHPC delivers a win-win: superior strength and lower lifecycle costs.

Best of all, Cor-Tuf UHPC achieves these benefits with traditional ready-mix trucks and local mix ingredients. Look no further for a contractor-friendly way to improve strength without excess cost. Your sand, your cement, our UHPC.